"A Community that SWEATS Together, STAYS Together."

We don't support RACISM in our doors or outside of them! We don't agree with and will NOT tolerate Social Injustice!

We want to provide a safe, encouraging, and positive environment for adults, kids, and athletes of all ages to learn, improve, and reach their health and fitness goals. Most importantly we want to be a place that people leave healthier and happier than when they walked in. 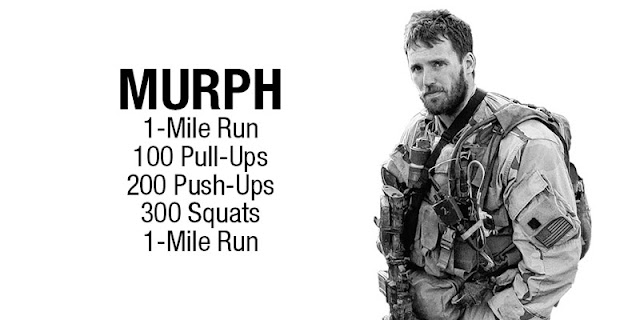 Michael Patrick "Murph" Murphy (7 May 1976 – 28 June 2005) was a United States Navy SEAL officer who was awarded the U.S. military's highest decoration, the Medal of Honor, for his actions during the War in Afghanistan. He was the first member of the U.S. Navy to receive the award since the Vietnam War [1]. His other posthumous awards include the Silver Star Medal (which was later upgraded to the Medal of Honor) and the Purple Heart.

After college he accepted a commission in the United States Navy and became a United States Navy SEAL in July 2002. After participating in several War on Terrorism missions, he was killed on 28 June 2005, after his team was compromised and surrounded by Taliban forces near Asadabad, Afghanistan.

The U.S. Navy ship USS Michael Murphy, and several civilian and military buildings have been named in his honor.
Content courtesy Wikipedia

This workout was one of Mike's favorites and he'd named it "Body Armor". From here on it will be referred to as "Murph" in honor of the focused warrior and great American who wanted nothing more in life than to serve this great country and the beautiful people who make it what it is.
Content courtesy CrossFit.com

This year will be our first Murph at The Farm. We’ll be running heats every 30 minutes - please sign up for a heat as soon as you arrive and plan on arriving thirty minutes early. We’ll be running on the road, please run against the traffic. You can divvy the push-ups, pull-ups and squats however you wish. Strategies will be provided for you to pick your poison of choice.

Concerned Murph could be too much for you? In true CrossFit style, this WOD is scalable to any athlete’s current fitness needs. If you are concerned speak with a coach about these options.

Afterwards stick around for a post-Murph BBQ! Please bring your own meat and beverage, and a side dish to share. A grill will be available for grilling. Feel free to invite the fam and bring games!
Email ThisBlogThis!Share to TwitterShare to FacebookShare to Pinterest
Newer Post Older Post Home

Stay in the Loop