"A Community that SWEATS Together, STAYS Together."

We want to provide a safe, encouraging, and positive environment for adults, kids, and athletes of all ages to learn, improve, and reach their health and fitness goals. Most importantly we want to be a place that people leave healthier and happier than when they walked in.

Class Times: 10am and 6:30pm (NO other classes available)

Please Bring to the Block Party:
Chairs, outdoor games, basketball, beverages for your family, meat to grill, and a side to share!

Facebook Murph Event:
To stay connected and notified with update please RSVP to our BCF's CrossFit Event page at https://www.facebook.com/events/236276963791059/ 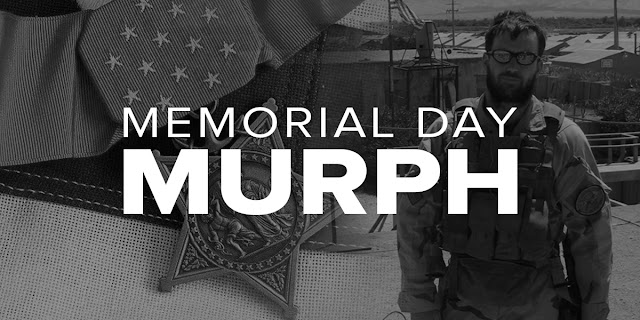 What is Murph?
In memory of Navy Lieutenant Michael Murphy, 29, of Patchogue, N.Y., who was killed in Afghanistan June 28th, 2005.

This workout was one of Mike's favorites and he'd named it "Body Armor". From here on it will be referred to as "Murph" in honor of the focused warrior and great American who wanted nothing more in life than to serve this great country and the beautiful people who make it what it is.

A team of 4 Navy Seals led by LT. Michael P. Murphy on a mission to capture or kill a key Taliban leader, found themselves seriously outnumbered in a firefight with hundreds of enemy troops. Pinned down and under intense enemy fire, their communications operator severely wounded, they were in desperate need for help. Due to the mountainous terrain, their communications could not be received. Understanding the situation, LT. Michael P. Murphy moved to open ground, to use his satellite phone, exposing himself to enemy fire. LT Murphy was mortally wounded making that call. They continued fighting until Lt. Murphy and two of his three team mates were mortally wounded. His fourth team member, severely injured himself, managed to escape and was rescued 4 days later. He went on to tell the story in a book and movie titled “The Lone Survivor”.

For his selfless leadership, courageous actions and extraordinary devotion to duty, LT. Michael P. Murphy was posthumously rewarded the Medal of Honor, the first service member to receive the medal for service in Afghanistan, and the first Navy recipient of the medal since Vietnam.

You can learn more about the challenge here: https://themurphchallenge.com/

Let's Make a Difference BCF!
In unison with honoring Lt Murph and celebrating Memorial Day we have an amazing opportunity to help a local CrossFit athlete and high school math teacher battling Oligodendroglioma. Starting Monday May 14th and running through the Murph Challenge on the 28th, a donation jar will be set up at the box. Our hope is that everyone that participates in Murph can spare $10 to donate to this amazing man. We know thats What Lt. Murphy would want us to do. All proceeds will be given directly to this man and his family. To learn more about Dave and his fight we have linked the Facebook event page for this cause.